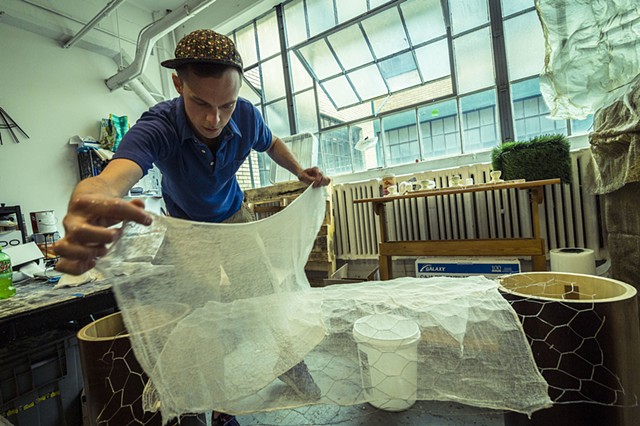 An award-winning artist whose innovative work has been featured throughout Indiana, Lukas Schooler has been a fixture of the Indianapolis art world since finishing his college career in 2009. He has received solo shows from Biscuits and Gravy Gallery (2009), Big Car Gallery (2011), Herron School of Art and Design (2013), and the Indianapolis Art Center (2014).  Most recently, he was awarded the 2013-14 Stutz Studio Residency, which provided him with a free studio space at Stutz Arts Association for one year. Lukas is a former company member and Director of Operations for NoExit Performance, acting as set designer for Middletown (2014), Our Experiences During the First Days of Alligators (2013), and Death for Sydney Black (2012). He received his directorial debut with Suzan Lori-Parks' VENUS in February 2014. Prior to joining NoExit, Lukas graduated cum laude with his bachelor's degree in studio art from DePauw University, where he received the Vera Farber Scholarship for Exceptional Promise as a Young Artist.  During his college career, Schooler founded the Student Arts Council and Low Road Gallery, later becoming a fifth-year intern and class instructor with the university's art department. Photo courtesy of Zach Rosing